WE TRAVELLED to the Kalahari for Dawid Kruiper's state funeral on June 30, 2012, and stayed on with the Kruiper family and Bushman community after everyone had left, sharing their sense of loss, and mourning, and their determination to continue walking the path to the dream Dawid pioneered and wished his descendants to realise.

Dawid's dream remains alive amongst his family and Bushman followers, and with us as film-makers. This dream is embodied in Dawid's will to return to the wilderness with his people, to record the truth of his ancestral story, and to regenerate his ancestors' traditional knowledge through initiatives such as the veldskool he pioneered on the Bushman lands inside the Kgalagadi Transfrontier Park.

One of Dawid's last wishes was for the often hidden truths of the Kruiper family's ancestral story in the Kgalagadi wilderness to be recorded so his descendants could know their origins, and to place on record the Bushman version of history so often overlooked by the historians of cultures which dominated and exterminated the Bushman peoples of Southern Africa. He was confident that he would achieve this through recording his story for A BUSHMAN ODYSSEY and in the book to be published by Patricia Glyn.

Dawid's funeral was a huge event attended by a wide diversity of fellow Bushmen and friends, Nama and KhoiSan groups, government officials and a police honour guard, churchfolk, journalists, NGO representatives and admirers. The footage we filmed at the funeral and with Dawid's family afterward will form a moving and poignant part of the story we tell in A BUSHMAN ODYSSEY.

Dawid was buried on Witdraai farm, on the Khomani land claim which he piloted to fruition in 1999.
Dawid Kruiper leaves a powerful social and spiritual legacy which we honour as we proceed with post-production.

A BUSHMAN ODYSSEY is scheduled for completion by early November. We will upload selected clips during the edit process.

We are trying to organise a trip with the Kruiper family to the Kuru San Dance Festival in Botswana next month, during which the family would receive spiritual healing during a traditional San/Bushman healing dance ceremony. Costs are however a concern and we are trying to raise further funds for this journey. 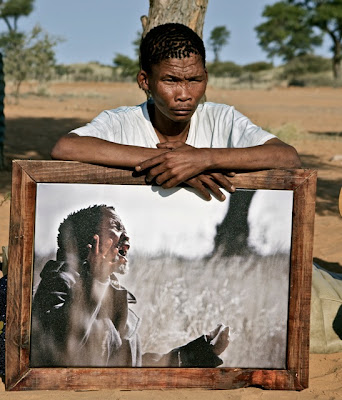