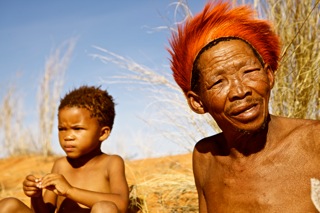 San man strung up and beaten

NATURAL HABITAT: Buks Kruiper in the Kalahari dunes with his granddaughter Samara. The picture was taken recently during the filming of A Bushmen Odyssey about the Kruiper family. He has laid a charge of assault against a supermarket security guard. Photo: Grant Ashfield/Onetime Flims
Melanie Gosling
BUKS Kruiper, 70, the brother of the late Khomani San leader, Dawid Kruiper, was handcuffed and strung up in the “helicopter” torture position by a supermarket security guard in Upington after being accused of stealing a packet of chips.
The guard then punched and kicked him. Afterwards, he took out his cellphone and photographed the bleeding man hanging from the door railing.
Yesterday, speaking in Afrikaans on a friend’s cellphone, Kruiper told the Cape Times: “My hands are still dead. They feel cold.”
Kruiper is working with Richard Wicksteed on a film and with Patricia Glyn on a book about the Kruiper family.
Glyn, friend Lisa van As and Kruiper went into the Spar on Monday where Glyn bought all of them packets of chips. Kruiper put his in his pocket, Glyn paid and they left the shop. Once outside they realised Kruiper was not with them.
Glyn and Van As searched the shop and the streets, and half an hour later returned to the Spar. Staff told them Kruiper had been arrested for shoplifting.
He emerged from a room in the back of the shop with blood on his shirt, a black eye and a cut on his forehead. There was blood on the security guard’s trousers.
“It took a long time for Buks to be brought to me, during which time the manager’s son took some paper towel to him and told him to clean himself up. The guard was instructed to clean the blood from the floor with a mop,” Glyn said.
Kruiper told her that the security guard had taken him to a back room, handcuffed his hands behind his back and then used a rope around the handcuffs to hoist him up and hang from the top of a door railing.
“He punched and kicked Buks brutally. When he left, Buks asked the butchery women to please let him down but they were terrified and said they couldn’t.”
She said Kruiper weighed under 50kg and the guard was twice his size. Glyn had a “heated exchange” with the Spar owner, Maria Gouws, who offered to pay his medical expenses.
“Initially Buks didn’t want to press charges, but now he has laid a charge of assault. It was shocking. These people have suffered for generations from abuse from all races.”Gouws condemned the assault yesterday, and said she had immediately phoned the security company, Hencor, to say she did not want the guard in her shop.
She was not on the shop floor when the incident happened, but her son had found Kruiper in the back. Gouws said the store did keep handcuffs, but not ropes, so Kruiper could not have been hanging. If someone was caught shoplifting, they were taken to the back and handcuffed until the police arrived.
“We have to handcuff them or they run away. But I did not agree with what (the guard) did. Spar is innocent in this. We hire the guards from a security company and they get changed every few days. I phoned his boss and said I did not want him in in the store and 10 minutes later one of his superiors came and took him away,” Gouws said. Eddie Cheshishiku, the owner of Hencor Security, said he had suspended the guard after he heard about the incident.
“I spoke to him and he said he did it by mistake. It was not good what he did,” Cheshishiku said. He would interview the guard thoroughly when he returned to Upington today and decide what action to take. Captain Jaques September of the Upington police confirmed that Kruiper had laid a charge. The matter was being investigated, and no arrests had been made.
Gepost door Karl Symons op 04:15 Geen opmerkingen: